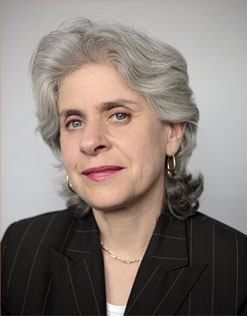 As a partner at Grad & Weinraub, LLP, Cathy specializes in representing tenants before trial courts, appellate courts and administrative agencies, including DHCR.  She has expertise in handling other complex litigation arising out of disputes over real estate and real estate transactions and in defending tenants and tenant organizations against SLAPP suits. She also represents co-op shareholders and condo unit owners in litigation and handles co-op and condo sales for sellers and purchasers.

Cathy frequently teaches Continuing Legal Education courses and training sessions for attorneys in landlord-tenant law. She has been a guest on WBAI's Housing Notebook, and Tenants and Neighbors television program. She is active in the Association of the Bar of the City of New York.  She was on the Housing Court Committee (2000-2003), the Judiciary Committee (2004-2006 and 2010 to present) and the Civil Court Committee (2008 to 2010). She is currently on the board of Metropolitan Council on Housing (2010).  She is also active in the Morningside Heights area of New York City in issues affecting tenants and has volunteered at clinics helping tenants throughout New York City.

Cathy began her litigation career at the Legal Aid Society’s Criminal Appeals Bureau and Criminal Defense Division (1984 to 1988).  Later, as an associate at the law firm of Cohen, Weiss & Simon, Cathy represented labor unions in complex civil cases in state and federal courts (1988 to 1989). From 1989 to the present, she has been representing tenants, first as a staff attorney at the Legal Aid Society’s Community Law Offices (1989 to 1995) and now as a partner at Grad & Weinraub, LLP.

Cathy graduated from Barnard College (with honors) and Columbia School of Law, where she was an associate editor for the Human Rights Law Review.  Columbia Law School designated her a Harlan Fiske Stone Scholar for distinction in scholarship and awarded her a Charles Evans Hughes Fellow for demonstrated interest in the legal problems of minorities and the economically disadvantaged.